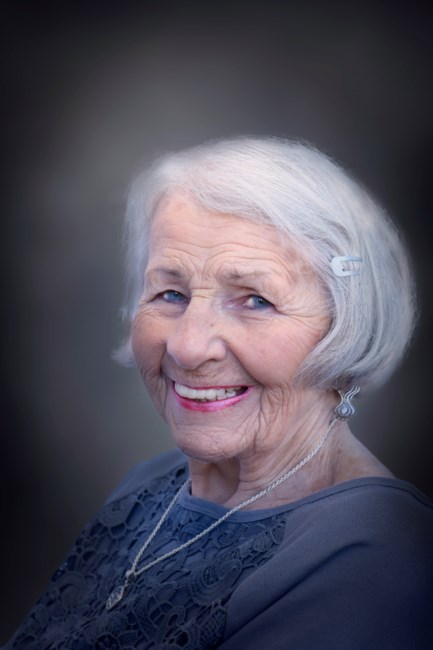 Sally Snellbaker Semmler May 9, 1933-August 19, 2022 Sally Semmler was born to Gladys and Clyde Snellbaker in Clinton, Michigan and was the second of three children. The family moved to Toledo, OH soon after Sally’s birth and she resided there until she was married. Sally married Paul Frederick Semmler February 19, 1955. Paul preceded her in death in August, 2016. She and Paul had two sons, Scott and Todd. She was a second mother to her niece, Tamera Semmler Howell. Sally is a beloved aunt to Tina Semmler, Lori Snellbaker Buchop, and Brad and Craig Snellbaker. Sally was a homemaker, volunteer and was employed by various companies including Champion Spark Plugs, and the government (CIA, but she never said exactly what she did). She started her volunteer work in high school as a member of the Zetalethian Literary society and continued as a member of the Officer’s Wives Club, served as an Arlington Lady assisting service members and their families find peace at Arlington Cemetery. She was a founding member of the Clifton Horse Society, served with her local MOAA chapter, volunteered at her church and the Town of Carolina Beach. As an Air Force wife Sally lived across the country and globe. She frequently reminisced about her time in Taiwan in the 1970s and about life at various Air Force Bases. Sally was active in figure skating in her youth, played golf, bowled and played bridge. Sally was a faithful Lutheran. She enjoyed playing cards, supporting her husband in his love for horses and was passionate about elephants. She earned her pilots license in 1961. Sally enjoyed watching old movies, especially musicals and listening to big band music. She was a passionate patriot and loved all things American. She was an active supporter of several military and veteran’s charities, as well as animal welfare societies, being particularly fond of elephants. Sally is survived by her sons, Scott Semmler (Caryll) of Sudley Springs, VA and Todd (Anne Marie) of Hanahan SC, and two grandsons, Joshua and Jacob Semmler. A celebration of life will be held in Wilmington NC at a date to be announced later. Sally and Paul will then be interred at Arlington National Cemetery. In lieu of flowers, those who wish may make donations to the Mara Elephant Project or the military charity of your choice.
See more See Less

In Memory Of Sally Snellbaker SEMMLER