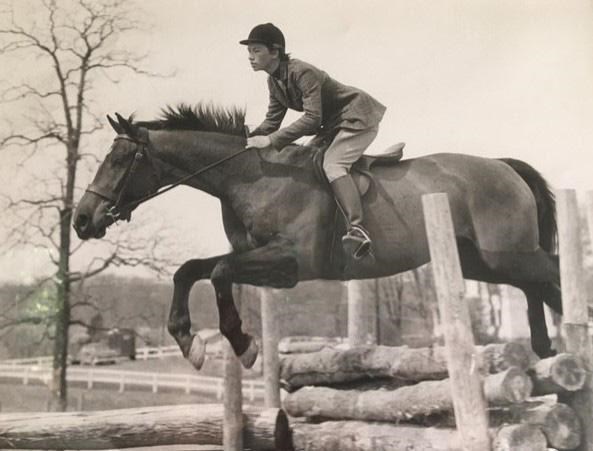 Marion Hoyt Lee of Leesburg, Virginia passed away on Wednesday, July 27, 2022 at the age of 88. Marion was born to Ernest and Sarah Lee on June 17, 1934 in West Point, New York. She was the youngest with two brothers. Marion started riding horses at age eight and continued for 80 years. She attended Mary Washington College as an English major. It was here that she road with Captain Vladimir Littauer and learned his forward riding system. Marion kept in touch with some of her college riding friends and spoke fondly about her memories at Mary Washington. After graduating in 1956, Marion pursued her interest in horses. She worked with the Master of Foxhounds for the Groton Hunt in Massachusetts, schooling young horses and exercising hunters. Jane Marshall Dillon invited Marion to teach at Full Cry Farm in Vienna, Virginia where she served as a resident instructor for over eight years and was a featured rider in Dillon’s book, “Form Over Fences: A Pictorial Critique of Jumping for Junior Riders.” Marion served on the American National Riding Commission (ANRC) board in various roles over many years, judging the first ANRC National Equitation Championship and two others (1978, 1982, 1985). She retired as Executive Secretary in June 2021 but remained very involved with her horse riding and typically rode several times per week as recently as a couple of months ago. In 1965, just a few years after the advent of programming languages, Marion took a computer course and landed a job in the computer industry. She worked for Sperry Univac, Unisys, and later Planning Research Corporation. Marion always loved the company of animals—horses, dogs, and cats. Marion also loved reading, music, and travel. Marion was universally praised by friends, neighbors, and acquaintances for her kindness, friendliness, and generosity. She "never met a stranger." She approached life in much the same way she approached riding—with a steady poise and forward-leaning readiness. Marion is survived by her sisters-in-law, Doris Lee of Palm Beach Gardens, FL and Peggy Lee of Gig Harbor, WA; nephews David (Kristi) Lee of West Palm Beach, FL and John Lee (Mireille) of Madison, WI; nieces Kathryn Alcock (Gary) of Glen Ellyn, IL; Wendy Stewart (Mike) of Gig Harbor, WA; and Elizabeth Lee of Gig Harbor, WA. She is preceded in death by her brothers Fitzhugh Lee of Gig Harbor, WA and Orrin Lee of Cary, NC. A Memorial Service will be held on Sunday, September 18, 2022 at 11:00 am at the Birkby House; 109 Loudoun Street SW, Leesburg, Virginia 20175. Free parking is available at Liberty street lot, 204 Liberty St SW (one block south of Birkby House). There will be a Brunch Celebration of Life Reception held immediately following. Her final resting place will be in a peaceful pasture in the hills of Virginia. In lieu of flowers, donations can be made in memory of Marion to: Loudoun Therapeutic Riding: https://ltrf.org/.
See more See Less

In Memory Of Marion Hoyt Lee